Celebrate Easter with Sabeel and FOSNA 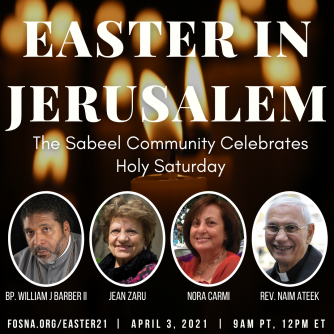 MennoPIN invites you to a special Easter Saturday resurrection celebration with the Friends of Sabeel North America (FOSNA) and the Sabeel Ecumenical Liberation Theology Center (Sabeel). The celebration takes place on Saturday, April 3 at 9 am Pacific/noon Eastern Time/7 pm Palestine.

The first Easter celebration took place in Jerusalem. The Palestinian Christian community has kept the celebration going ever since. Every year on Holy Saturday Palestinians participate in a unique commemoration of the resurrection via a stream of candles from the Church of the Resurrection (Holy Sepulchre). Last year the pandemic didn’t allow this unique tradition. FOSNA and Sabeel Jerusalem created a virtual worship service to continue the spirit of the tradition in which Christians from around the world will join Palestinian Christians in their traditions and connect with their current struggles.

Like those living in the land in the time of Christ, Palestinians are under a brutal military occupation. Like the early Church, Palestinians find hope in Jesus’ message of liberation, his solidarity with the oppressed, and his resurrection. Our preachers this year will further the themes of interconnected liberation struggles. Palestinian Christian activists Nora Carmi and Jean Zaru will be joined by Bishop William J Barber II, of the New Poor People’s Campaign. Also, Sabeel co-founder, Naim Ateek, will lead everyone in a ceremony to bring together a community of care to work for collective liberation.

A Conversation About Justice & Peace for Palestine/Israel
Another upcoming event, sponsored by the Western District Conference (Mennonite Church USA) and the Palestine Task Force, will provide a safe space for informal dialog around current conditions in Gaza and the West Bank and MennoPIN’s Gaza Twinning Initiative. There is no cost to participate, and you can register with an email to wdc@mennowdc.org. 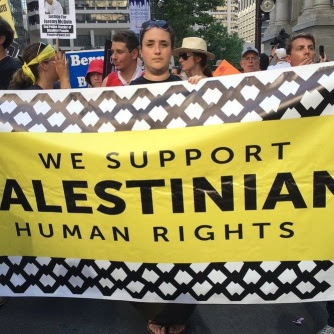 The Jewish National Fund (JNF) recently brought a lawsuit against the US Campaign for Palestinian Rights (USCPR), accusing it of providing “material support for terrorism” through their use of language and with their support for the Palestinian-led Boycott, Divestment and Sanctions movement (BDS). JNF is an Israel organization devoted to buying and developing Palestinian land for the purpose of building Jewish settlements in the West Bank. USCPR is a leading voice for Palestinian rights in the United States that has participated in the “Stop the JNF” campaign, an advocacy campaign seeking to challenge JNF for international law violations.

The kind of lawsuit filed by JNF is typical of a growing practice of suppressing activism in support of Palestinian rights. Palestine Legal is a U.S. organization seeking to protect the civil and constitutional rights of people in this country who speak out for Palestinian freedom. Palestine Legal has reported that between 2014 and 2020 there have been 1,707 incidents of suppression targeting supporters of Palestinian rights.

Federal Judge Richard Leon responded to a request to dismiss the lawsuit stated in his ruling: “While the plaintiffs make broad allegations that the US campaign provided financial assistance to Hamas, they fail to plead factual allegations sufficient to support these claims. The more specific factual allegations…are simply too removed from a terrorist act or organization to state a claim under the [Anti-Terrorism Act]…Plaintiffs’ argument to the contrary are, to say the least, not convincing.”

Biden Steps and Missteps Toward Palestine 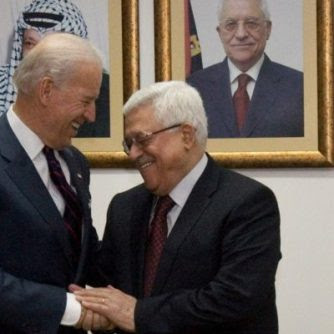 (Credit: AP/Bernat Armangue)
The new Biden Administration is following through on some of its campaign promised toward Palestine, but also leaves much undone.

In a recently released US State Department memo, The US Palestinian Reset and the Path Forward, the administration is taking some positive steps forward. Immediately Palestine will receive $15 million dollars in COVID-19 assistant and there is the promise of reversing several of the Trump Administrations positions. The memo describes the US vision as one to “advance freedom, security, and prosperity for both Israelis and Palestinians in the immediate term, which is important in its own right, but also as a means to advance the prospects of a negotiated two-state solution.” The State Department memo includes the following:

The administration has also hinted that they are opened to taking a firmer stand against Israeli settlement expansion in the West Bank. But nearly every president in the past few decades has expressed the same view, but never put teeth into their opposition and continued to fund Israel’s military to the tune of many billions of dollars per year. Will Biden be different?

And Biden has already stated that he will not return the US Embassy to Tel Aviv and that he fully accepts the normalization of Arab nations enhance relationships with Israel. Beyond that, Biden has also left no doubt that he opposes the decision of the International Criminal Court (ICC) to Israeli war crimes against Palestinians. Perhaps worse of all, Biden has clearly embraced the definition of anti-Semitism espoused by the International Holocaust Remembrance Alliance. As the US Deputy Assistant Secretary of State, Kara McDonald: “The Biden Administration embraces and champions the working definition [of IHRA]. We applaud the growing number of countries and international bodies that apply it.”

We can affirm the positive steps taken by the Biden Administration, but there is much to push them on in the months and years ahead.

Jonathan Cook on the Israeli Election
Jonathan Cook is a freelance journalist based in Nazareth who writes extensively about the Israeli-Palestinian conflict. While the election is still unresolved (as has been the case in the past several elections), Cook is clear about who won: “The far-right is triumphant.” He goes on to say that extreme religious and settler parties hold a firm majority in Israel’s new parliament, holding at least 72 seats in the 120-member elective body. By comparison, the center-right parties, Blue and White and Yesh Atid, garnered a mere 25 seats; the center-left parties, Labor and Meretz took only 13 seats; and the remaining various parties could manage together just 10 seats.

Although the far right has a substantial majority, Cook believes they “could easily form a government – if it wasn’t mired in a now seemingly permanent crisis over the figure of [Prime Minister Benjamin] Netanyahu. Despite perceptions abroad, in Israel, according to Cook, Netanyahu is actually one of the more moderate figures in the extreme religious and settler bloc, placing him closer to Benny Gantz of the Blue and White party as compared to even his own Likud Party.

Although Likud emerged as the largest party vote-getter, they still do not have a clear path to a 61-seat majority. While Netanyahu continues coalition negotiates to victory, President Reuven Rivlin will meet with all party leaders on Monday, April 5, before deciding which party leader to receive the mandate to form a government. Kumi Now – Rising Up for Palestine

The Sabeel Ecumenical Liberation Theology Center, located in East Jerusalem, has started Kumi Now to connect activists around the world with organizations working on the ground in Palestine and Israel to bring justice and lasting peace based on international law and nonviolence. Here is how Sabeel describes Kumi Now: “In response to our current situation and adhering to our principles of justice, inclusion, and nonviolence, Sabeel has been moved to act. After months of collaboration with local Palestinians, Israelis, and internationals, Sabeel is excited to introduce the Kumi (Rise Up) project. We wish to invite local and international individuals and organizations to join the Kumi project to work as a united force.”

To keep current on what is happening in Palestine and join others from around the world in support of Palestine, we encourage you to be part of Kumi Now You can view the current week’s Kumi Now here.
Stay Informed on Palestine
MennoPIN keeps you informed about Palestine through our monthly update, special alerts, calls to action, important resources and tour possibilities, all from an Anabaptist perspective. But there are additional excellent organizations and web publications that can keep you informed, some on a daily basis. We invite you to explore these groups and visit the web publications as another way to keep current and active for the people of Palestine. Here are some MennoPIN recommends:

After twenty years of planning and construction a new wastewater treatment plant has been put into operation in Gaza, with help from German investment. The plant has been built in the town of Bureij and will process wastewater from eleven communities with one million inhabitants. It will be powered by a biogas plant and a solar plant on the same site…Lord, we are thankful that many families in Gaza will now have access to potable water. We continue to pray for those people who go for days without running water due to the low levels of freshwater in ground reserves. Lord, in your mercy…hear our prayers. Sabeel Wave of Prayer—
Mennonite Palestine-Israel Network
mennopin@gmail.com | mennopin.org | facebook.com/mennopin | twitter.com/mennopin