In This Issue
Deal of the Century – And Now What?
Part 1 – Bibi to Palestine: “Accept it or not, it’s going to happen”
Part 2 – Former Israeli Ambassador to South Africa: “No…to this new apartheid”
Part 3 – Jonathan Kuttab: “And now what”?
“I wasn’t sent to defend the state, I was sent to murder”
The Coronavirus and Palestine – Bethlehem in Lockdown
Sabeel Holds First Young Adult Gathering
Join Counter CUFI This June
Eye-Opening Tours to Palestine
Read More
Prayer

Deal of the Century – And Now What? 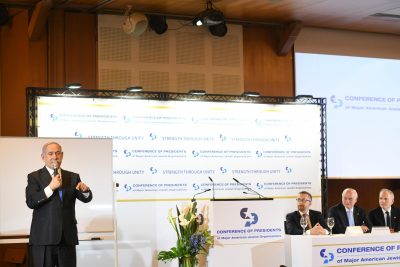 Benjamin Netanyahu, speaking to the presidents of American Jewish Organizations in Jerusalem, explains how he plans to pound Palestinians into submission (Credit: Netanyahu Twitter Feed)

Part 1 – Bibi to Palestine: “Accept or not, it’s going to happen”

Addressing the presidents of American Jewish Organizations in Jerusalem in mid-February, Benjamin Netanyahu spoke glowingly about the so-called Deal of the Century and his relationship to Donald Trump: “For the last three years I’ve worked very closely with a good friend of mine, President Trump, we’ve never had a better friend of Israel in the White House.”

With an arrogance of power matched only by Donald Trump, Netanyahu laid out to his audience the conditions Palestine must meet according to the ‘Peace Plan,’ for there to be peace, including:

But, in his mind, whether Palestine agrees or not to these conditions for peace with Israel, it really doesn’t matter: “Whether they accept it or not, it’s going to happen…Who’s to say that they fulfill these conditions? Two powers. The United States and Israel.”

Alon Liel served as Israel’s ambassador to South Africa from 1992-1994 and was the Director-General of Israel’s Ministry of Foreign Affairs from 2000-2001. Liel had a front row seat watching the dismantling of apartheid in South Africa. Writing in the February 27, 2020 issue of Foreign Policy, Liel blasted the Deal of the Century as “Israel seeking to introduce and develop the new millennium’s version of the old South Africa’s deplorable policy.”

Comparing the plan to the South African government’s Bantustan, he described the Deal of the Century this way: “The details of the proposal, and the rhetoric used by both Trump and Netanyahu, made it clear that this was not a deal but rather the implementation of Netanyahu’s long-standing plan to further entrench Israel’s control of the West Bank by giving its residents disconnected enclaves of territory without granting them real freedom or basic political rights.”

He concluded the article with this indictment: “Trump believes he can disregard international law and legitimize a new 21st-century model of apartheid. This arrogant show of force must be met with a clear answer…No one must give even tacit approval to this new form of apartheid and the ideology undergirding it. Doing so would betray not only the legacy and efficacy of international resistance to South African apartheid but also the fate of millions of people living in Israel and what should be a truly independent Palestine.”

You can read the entire article here.

Jonathan Kuttab is a member of the MennoPIN Steering Committee, a prominent human rights attorney and founder of several Palestinian Human Rights organization. In the February 2020 issue of the MennoPIN Monthly Update Kuttab analyzed the 181-page so-called Peace Plan.

Earlier this month, Kuttab followed up his analysis with an article on the Middle East Institute website entitled, “And Now What? A Realistic Approach to the Israeli-Palestinian Impasse.” He asks, “If a genuine two-state solution is truly dead, and an equitable one-state solution is even harder to achieve, then where does that leave us”?

Assuming the Deal of the Century becomes implemented, which Netanyahu full intends, Kuttab feels this “rude shock…also presents an urgent challenge for all those who reject it because they realize the dire implications of what it portends for the future of any peaceful negotiated solution.” Part of the agenda he proposes for the foreseeable future includes:

You can read the entire article here.

“I wasn’t sent to defend the state. I was sent to murder”

Snipers and locaters, perched on a shooting berm at the Gaza/Israel border, preparing to kill and maim (Credit: UPI/Alamy)

On March 6, 2020 the Israeli newspaper Haaretz published a summary from an interview they did with some of the snipers who have killed over 200 protesters at the Gaza/Israeli border since March 2018 and wounded and permanently maimed over 8,000 more. One was described as a “musician from a good high school,” and another as a “Boy Scout who majored in theater.” None of them expressed remorse or guilt about what they had done. Here are some of the blunt, chilling, matter-of-fact statements given by these young men:

The Coronavirus and Palestine – Bethlehem in Lockdown

Palestinian police officers stand guard in Bethlehem outside the closed down Church of the Nativity (Credit: Mussa Qawasma/Reuters)

At the instigation of Israel and in coordination with the Palestine Authority, the city of Bethlehem, along with nearby Beit Jala and Beit Sahour, were placed in a lockdown in early March. According to Palestinian Health Minister, Mai al-Kaila, the total number of coronavirus cases read 25 with more expected. All government and private institutions, including churches, mosques, clubs, convents, coffee shop and restaurants have been closed indefinitely. It is uncertain how long the lockdown will last.

The Sabeel Ecumenical Theological Center in Jerusalem announced its First International Young Adult Gathering, to be held June 17-25, 2000. This gathering provides an opportunity for young people from around the world, ages 18-35, to engage first-hand with local young Palestinians and hear their stories, learn more about current realities on the ground, explore and discuss together liberation theology, nonviolence, engaging Christian Zionism and to work together to take action.

MennoPIN encourages your participation at this unique and significant opportunity. To that end, MennoPIN is offering scholarships of $200 for each young adult deciding to attend. To apply for a scholarship, write us at mennopin@gmail.org. We hope you decide to attend this life-changing conference! Please pass this message on to friends, families and those in your church community.

The Friends of Sabeel North America (FOSNA) has issued a call to action to counter Christians United for Israel (CUFI). On June 28-29 CUFI will be meeting by the thousands in Washington, DC. Hundreds of people who struggle for justice and freedom for the people of Palestine will also be there to counter CUFI’s pro-Israel anti-Palestine message.

In their call to action FOSNA states: “CUFI has quietly become the largest organization in the United States driving support for Israel’s oppression of the Palestinian people. With over seven million members, CUFI uses its political leverage to ensure ongoing U.S. support for Israel’s colonization and military occupation of Palestine, including imprisoning Palestinian children; bombing homes, schools, and hospitals in Gaza; massacring peaceful protestors; and confiscating Palestinian land. By its own admission, CUFI led the charge to have the U.S. recognize Jerusalem as Israel’s capital, and it continues to push for unconstitutional anti-BDS legislation and illegal settlement expansion.”

MennoPIN is a co-sponsor of this action and encourages you to consider joining people from the MennoPIN steering committee in Washington, DC to voice your in opposing all that CUFI stands for. If you would like to explore this possibility, please go to FOSNA’s Call to Action here.

Go beyond your head knowledge about Palestine and get some heart knowledge by going to Palestine on a tour that will take you to Holy Land sites but also give you the chance to meet Palestinians, hear their stories, visit organization working for an end to the occupation and listen to Palestinian and Israeli activists for freedom, equality and the end of the violence. Here are several coming up this year and then visit the MennoPIN website for more details.

Read More
Kumi Now.
A Palestinian Theology of Liberation, Naim Ateek, Orbis Books, 2017
Why Palestine Matters
No Way to Treat a Child Campaign
Mondeweiss
The Electronic Intifada
HP-Free Church Campaign
Prayer
The Palestinian Authority called a 30-day state of emergency throughout the West Bank after twenty COVID-19 cases were confirmed in a Bethlehem hotel. Alongside this, Israeli authorities as part of their public health restrictions, in agreement with the Palestinian Authority, have closed checkpoints only allowing people to leave if they have to travel directly to the airport or have special permission. Lord we pray for those in the frontline of treating this new virus. We pray for those who have been diagnosed with the virus. We also pray for those whose livelihoods have been affected by ongoing and constantly changing public health restrictions. Lord, in your mercy…hear our prayer. Sabeel Wave or Prayer