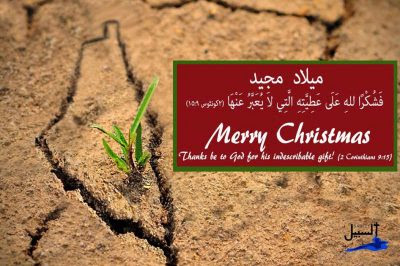 The MennoPIN Steering Committee joins Sabeel in Jerusalem and all Christians in Palestine in wishing you many Christmas Blessings as we, together, look forward to a New Year of continuing solidarity with all the people of Palestine in their long struggle for peace, justice, reconciliation and healing. May 2020 be a break-through year for peace in the Holy Land! 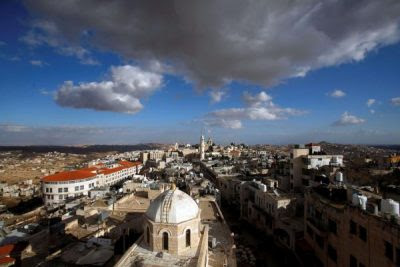 With a total population of about two million people in Gaza, only 1,000 are Christians and most of them are Greek Orthodox. An Israeli human rights group, Gisha, sees the ban in broader terms, calling it the “intensifying of access restrictions between the two parts of the Palestinian territories…a deepening of Israel’s separation policy” for the West Bank and Gaza.

While condemning the move, Christian leaders in East Jerusalem are making an appeal to Israeli authorities to reverse their decision: “Other people from around the world are allowed to travel to Bethlehem…Gaza’s Christians should have that right, too.”

From November 29 to December 7, 2019, two major conferences were held in Bethlehem, Palestine, one by Kairos Palestine and the other by Sabeel, with some people attending both. Kairos Palestine celebrated its 10th anniversary on November 29-30. Their founding document, A Moment of Truth, advocates for the end of the Israeli occupation and the establishment of a just peace in Palestine/Israel. The 10th anniversary conference issued a statement that begins with these words: “Since the launch of A Moment of Truth ten years ago, life in Palestine has rapidly deteriorated under the illegal occupation by the State of Israel. The oppression is more aggressive and brutal. Our imprisoned and besieged sisters and brothers in Gaza, non-violently gathering in the March of Return, were the targets of a bloody and deadly response. Settlements continue to expand. Threats of annexation of the Jordan valley and the settlements themselves grow without a word of condemnation from the major powers. We are experiencing the continued dispossession of our land, our freedom and our human rights.”

The statement affirms that prophetic voices within the global church are very helpful, but with many Christians, who misuse the Bible to unquestioningly support Israel, Kairos Palestine feels that “the global Church is failing us.”

The ending of the statement shows the courageous resistance to injustice the Christians in Palestine continue to demonstrate: “Know that ten years after the first call of Kairos Palestine, we resist fainting and becoming weary and falling exhausted. Empowered by the equal love of God and joined together with others in God’s community of grace—coming on earth as it is in heaven—we mount up with wings like eagle (Isaiah 40:31). We run and grow not weary. We walk and faint not. God’s design for universal justice, peace and provision may be delayed, but it will not be deterred.”

The Sabeel 1st International Gathering ran from December 1 – 7. Christians from 17 different countries heard numerous speakers, Christian, Muslim and Israeli, update the situation on the ground in Palestine. Sponsored by The Sabeel Ecumenical Liberation Theology Center, the gathering explored many pertinent issues including that of Jerusalem, Christian Zionism, Jubilee, Palestinian Christianity and the Bible. All the speakers were Palestinian and one entire day the presentations were mostly in Arabic.

Last year Sabeel launched the Kumi Now Palestine Initiative. Based on the story in Mark (5:21-34) of Jairus’ daughter, who Jesus raised from the dead with the words, “Talitha, kumi” or “Little girl, rise up. The Kumi Now initiative calls for Christians in Palestine to rise up in nonviolent resistance to the occupying forces.” At the December conference Sabeel launched the Kumi Now Global Initiative, inviting the global church to join in the struggle based upon the principles of inclusivity, justice (according to international law) and nonviolence. All those attending the conference pledged to take Kumi Now back into their home countries.

Palestine: A Year in Review 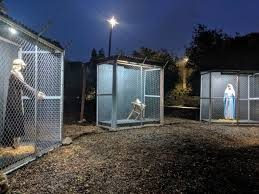 2019 has been a devastating year for Palestinian rights, including:

But there have been glimmers of hope in the darkness, including:

Thank You for Helping!
Last month MennoPIN asked for your help in raising $2,700 to support our work in challenging Christian Zionism. You not only sent in what we needed, but more! We will use the additional funds for other work we are doing, especially around the Gaza Twinning Initiative (see below). The committees of MennoPIN are made up entirely of volunteers, so every dollar you sent is going 100% toward supporting the struggle for justice in Palestine. Thank you very much!
Become a Gaza Twinning Congregation 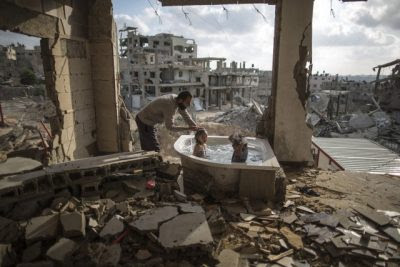 The current siege of Gaza has created severe restrictions on the availability of food, water, medical care, commerce and industry. A year after the March of Return, which resulted in hundreds of Palestinian deaths and tens of thousands of injuries, many peacemakers are feeling frustration and failure at our inability to focus attention on the condition of the people of Gaza. In response, MennoPIN is launching a new campaign among Mennonites to “End the Gaza Siege.”

The first step in the campaign is called the “Mennonite Twinning Initiative with Gaza.” This initiative will match Mennonite congregations with churches, mosques, hospitals, clinics and schools. Already, eight congregations have signed up and are on their way to being paired-up with Gaza!

Please give prayerful consideration to your congregation becoming a “twinning” congregation with Gaza! To find out more about the initiative, the Gaza scandal, and guidelines for ethical relationships, visit the MennoPIN website mennopin.org and click on End the Gaza Siege tab at the top of the front page. Interested congregations can send an email to mennopin@gmail.com with the Subject line “Twinning Initiative.”

Go to Palestine: Tours
MennoPIN strongly encourages trips to Palestine to see upfront the struggle Palestinians endure on a daily basis. Established justice tours usually last about two weeks and offer both visits to Holy Land sites as well as experiences with Palestinians and those who actively work for justice and freedom for the people of Palestine. Or you may want to plan a do-it-yourself tour. To find out more about tours, visit the MennoPIN website and click on the Tours to Palestine tab.
Read More
Kumi Now.
A Palestinian Theology of Liberation, Naim Ateek, Orbis Books, 2017
Why Palestine Matters
No Way to Treat a Child Campaign
Mondeweiss
The Electronic Intifada
HP-Free Church Campaign
Prayer
On Thursday, the 12th of December the Israeli authorities declared that Christians in the Gaza Strip would not be granted permits to travel to holy sites in the West Bank, including East Jerusalem, or into Israel over Christmas. Only men over 45 wishing to travel abroad traveling through Jordan may be granted permits. We pray with our Christian brothers and sisters as they seek to challenge the decision of the Israeli government to ban permits for the people of Gaza to visit family and celebrate Christmas in Israel or the West Bank, including East Jerusalem. Lord in your mercy…hear our prayer. Sabeel Wave or Prayer