The current siege of Gaza has created severe restrictions on the availability of food, water, medical care, commerce and industry. A year after the March of Return, which resulted in hundreds of Palestinian deaths and tens of thousands of injuries, many peacemakers are feeling frustration and failure at our inability to focus attention on the condition of the people of Gaza. In response, MennoPIN is launching a new campaign among Mennonites to “End the Gaza Siege.”

The first step in the campaign is called the “Mennonite Twinning Initiative with Gaza.” This initiative will match Mennonite congregations with churches, mosques, hospitals, clinics and schools. Already, eight congregations have signed up and are on their way to being paired-up with Gaza!

Please give prayerful consideration to your congregation becoming a “twinning” congregation with Gaza! To find out more about the initiative, the Gaza scandal, and guidelines for ethical relationships, visit the MennoPIN website mennopin.org and click on End the Gaza Siege tab at the top of the front page. Interested congregations can send an email to mennopin@gmail.com with the Subject line “Twinning Initiative.”

MennoPIN Can Use Your Help

At the last MennoPIN Steering Committee meeting, we made the decision to focus our energies leading up to the MC USA 2021 Convention around two goals: (1) End the Gaza Siege and (2) Say NO to Christian Zionism. To effectively do both, we need volunteer help from you. Here is a brief description of each goal:

End the Gaza Siege – Through education and action, we hope to bring greater awareness to Mennonite congregations about the decade-long Israeli blockade that is devastating Gaza and its people and to inspire action toward freedom and justice there. The Gaza Twinning Initiative is the first step in that direction, but there is much more to do.

If you have interest, energy and time to serve on one of these new committees, we would love to hear from you. Please write us at mennopin@gmail.com indicating your interest. Thank you for your prayerful consideration. 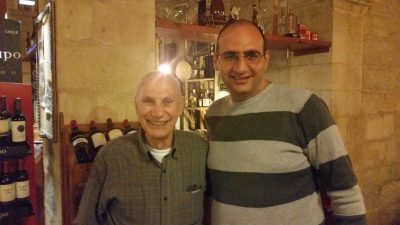 The Sabeel Ecumenical Liberation Theology Center, based in Jerusalem, will hold it’s first international gathering from December 2 to 7, 2019 in Bethlehem. The gathering will include organizations such as Kairos Palestine, Al-Liqa, Dar Al-Kalima and Bethlehem Bible College to demonstrate the wide variety of work being done within the Palestinian community. There will also be the opportunity to meet Muslim and Jewish brothers and sisters.

Omar Haramy, Sabeel’s Coordinator, says this about Sabeel’s hopes from this conference: “We want this gathering to be a time of fellowship, when our friends can update their knowledge of the situation, but more importantly, when they can explore new, effective and nonviolent ways to ‘kumi’ – rise up – so they can build on these new ideas when they return to their communities.”

For more information about the conference and how to register, please click here.

The Elections in Israel – Demonizing Palestinians

In December 2018 Israeli Prime Minister Benjamin Netanyahu called for snap elections after his ruling coalition began to fall apart. The resulting April 2019 elections pitted a coalition of religious and settler parties led by Netanyahu against his primary opponent, the Blue and White Party, headed by Benny Gantz and fellow generals who have led punishing military attacks against Palestinians for many years. That election came to a draw with both parties garnering 35 seats in the Knesset, Israel’s legislative branch. Because neither side could forge a ruling coalition, a new election was called for September 2019.

However, the ‘rerun’ election was also inclusive. This time Gantz gained 33 seats while Netanyahu’s total was 32. Whether either side can form a ruling coalition, whether they come together in some form of shared rule or whether an unprecedented third election will be called remains to be seen. But, as always, the people of Palestine are the big losers.

Jonathan Cook, a freelance journalist based in Nazareth who writes insightfully about the Israel-Palestine conflict, offers these comments on the September election:

Rep. Ilhan Omar introduces her pro-BDS resolution, H.Res. 496
In July the House of Representatives voted overwhelmingly to pass H.Res. 246, known as “Opposing efforts to de-legitimize the State of Israel and the Global Boycott, Divestment, and Sanctions Movement Targeting Israel.” Although it was a non-binding resolution, it nonetheless put Congress on record as opposing BDS, a movement initiated by Palestinians as one nonviolent way to put pressure on Israel to end the occupation, allow the right of return for Palestinians and bring justice, freedom and equality for the people of Palestine. You can find out how your representative voted here. Although the text of the resolution does not mention Israel or Palestine, it has been interpreted as a response to the growing strength of the BDS movement.In response, Rep. Ilhan Omar has introduced a resolution, H.Res. 496, to “speak about the American values that support and believe in our ability to exercise our first amendment rights in regard to boycotting.” You can read the text of H.Res 496 here. The resolution has 18 co-sponsors but needs more. Please encourage your congressperson to co-sponsor and vote for the resolution.

MennoPIN strongly encourages trips to Palestine to see upfront the struggle Palestinians endure on a daily basis. Established justice tours usually last about two weeks and offer both visits to Holy Land sites as well as experiences with Palestinians and those who actively work for justice and freedom for the people of Palestine. Or you may want to plan a do-it-yourself tour. To find out more about tours, visit the MennoPIN website and click on the Tours to Palestine tab.

On the 70th Great March of Return, 66 Palestinian civilians were injured due to the Israeli military’s continued use of excessive force against peaceful protests along the Gaza Strip’s eastern border. At least 20 children, 3 women and a volunteer paramedic were among those injured this Friday, August 16, 2019. Twenty-nine civilians were shot with live bullets; 2 of them were deemed in a critical medical condition. Each protest has its own theme with this one being titled “Palestinian Youth Friday” and involving activities such as speeches by political leaders and theatrical performances. Lord, we continue to pray for the right to protest peacefully in Gaza without the threat of injury or death by the use of live ammunition and dispersal methods by Israeli forces. We are grateful for those who continue to find new ways to protest in a creative and nonviolent way. Lord, in your mercy…hear our prayer.  Sabeel Wave or Prayer