In This Issue
MennoPIN Live Interview on April 30 on Christian Zionism
“My Name is Palestine” – A New Song by Garth Hewitt
Sabeel Helps Create a New Film on Jerusalem
In Israeli Election, Palestine is the Big Loser
May 15 Nakba Day Actions
Palestinian Voices (A NEW FEATURE)
Go To Palestine (Tours)
Read More
Prayer 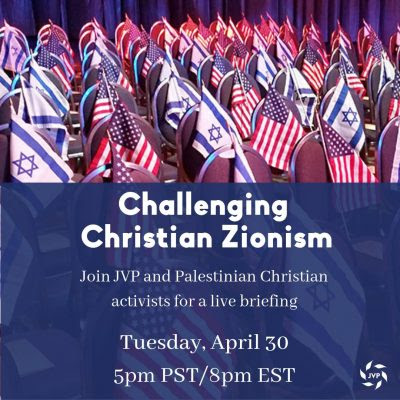 MennoPIN Steering Committee members, Jonathan Kuttab and Jonathan Brenneman, will be interviewed live by Jewish Voices for Peace on Christian Zionism on Tuesday, April 30, at 5:00 pm PST and 8:00 pm EST. Register to listen in here.

“My Name is Palestine” – A New Song by Garth Hewitt

Garth Hewitt has been a singer, song writer and author for over 40 years. During tours, he has visited areas of poverty, conflict and disaster throughout the world. The struggle of the people of Palestine for justice and peace holds a special place in his heart. He recently traveled to Bethlehem and visited Banksy’s Walled Off Hotel which has a gallery of Palestinian artists. There he saw a powerful and haunting painting by the Palestinian artist, Suleiman Mansour (above). The painting moved him so much that he decided to write a song sparked by what he saw. He entitled the song, “My Name is Palestine” and you can listen to it here.

The Sabeel Ecumenical Liberation Theology Center in East Jerusalem worked with Al Jazeera English to produce a two-part documentary film that sheds light on Jerusalem today and the realities on the ground. The series is entitled, “Jerusalem: Rock and a Hard Place.” The first part explores Israel, Trump and the Future of Jerusalem while the second part asks, Can Jews, Christians, Muslims Live Together?” The films offer an excellent and needed perspective on Jerusalem for today and for tomorrow. Each part is 48 minutes long and can be used in a variety of educational ways. You can find the two parts of the documentary here and here.
In Israeli Election, Palestine is the Big LoserThe winner (barely) of the April, 2019 snap election in Israel was Bibi (Benjamin Netanyahu), but the real loser wasn’t Benny Gantz (his opponent). The big loser was the people of Palestine. Netanyahu squeaked out a win with the help of his buddy, Donald Trump. As the election campaigning drew to a close, Trump announced his support for Israel’s annexation of the Golan Heights, which Netanyahu gleefully cheered. Indeed, Netanyahu intends to name a city in the Golan Heights after Donald Trump. It took only hours for Netanyahu to announce that if he won, he would annex key portions of the West Bank. Although Bibi and Benny garnered the same number of seats, only Netanyahu was able to form a governing coalition with extremist on the political right, and Palestinians will pay the price.It is certainly true, as Noam Chomsky pointedly stated on Democracy Now, that “if Benny Gantz had been elected instead of Netanyahu, the difference would not be very great…in terms of policy [toward Palestine]. But Diana Buttu, Palestinian-Canadian lawyer and civil rights activist, put it more bluntly, “In effect, it’s giving Netanyahu yet another green light to continue to do what he has done against Palestinians in the Gaza Strip, against Palestinians in the West Bank, against Palestinian prisoners, against Palestinians everywhere. The fact that we haven’t seen an international response against Israel has, in effect…allowed Netanyahu to turn around and say, ‘This isn’t costing me anything.’”The support of Palestinians by people of faith is needed now more than ever.

Kairos Palestine and Friends of Sabeel North America (FOSNA) are organizing actions around the country in support of Palestine on May 15, Nakba Day, commemorating the time in 1948-1949 when 700,000 Palestinian refugees were forced from their homes and villages into exile so that the State of Israel could be established.

Kairos Palestine has issued a statement “declaring as unjust and illegal the occupation policies and practices of the State of Israel over seven decades.” Thousands of people from all over the world has signed the statement. If you would like to add your name, click here.

FOSNA is taking the petition one step further by organizing actions around the country at the Israel embassy in Washington, DC, and consulate offices in Los Angeles, San Francisco, New York, Houston, Chicago, Boston, Miami and Atlanta. To join a vigil/action in those cities, click here for current information and updates as May 15 approaches.
Palestinian Voices (A NEW FEATURE)

With this issue of MennoPIN we are introducing a new regular feature – Palestinian Voices. Short of visiting Palestine yourself, reading the voices of Palestinian people is a vital way to go beyond political and theological analysis and statistics to the lives of real people and what they experience as Palestinians under military occupation.

This story comes from Zoughbi Zoughbi, founder and director of Wi’am, the Palestinian Conflict Transformation Center in Bethlehem.

“We are still in shock about the inhumane treatment of my wife who has been married to me since 1990, having raised our four children together during those years. Last week she arrived very early to the airport in South Bend Indiana, in order to fly through Chicago then to Newark, and finally, to Tel Aviv. Her children and I couldn’t wait to greet her, to welcome, kiss, and hug her…Our hearts were beating rapidly as we watched to see when the airplane would arrive in Tel Aviv, so we could talk to her on the phone and hear her voice…After initially being thrilled that she landed safely and joyfully in Tel Aviv airport, we stayed rooted next to the telephone, knowing that sometimes the Israeli Authorities will want to check our connection, to ensure she is related to us. After nearly thirty years, we know they already have profiles on all our family members. Even though all the information they need is available to them, the call is a subtle way for them to add extra humiliation. This is done in spite of the fact that we have always been a peace-loving family trying to live faithfully in the Holy Land. We refuse to hate.

“…Although she is an American citizen, they openly claimed she was a criminal because she married a Palestinian…For 29 years the authorities played a game around letting her into the country or not. My wife once said that she was honored to be treated as a Palestinian refugee, to live among those of us without a safe place, without a secure future.

“…This is not just a personal story only, but a story of my people. We refuse to be discouraged and decimated by the constant hurt and humiliation. Our commitment will not be any other manner, but a way of non-violence and the pursuit of legal restitution. We reject violence. But we will not give up even as our oppressors orchestrate new ways to push us away, out of our homes…[A]s [Jesus’] followers, we will not allow their attempts to crucify us be the final word. Those in power should have learned their lesson nearly 2,000 years ago. Our Lord was not defeated by pain and humiliation, but he was resurrected, in spite of the humiliating trials of the Via Dolorosa and the pain of Golgotha.  They forget He has won the victory already, in any struggle against injustice.”

Go to Palestine: Tours
MennoPIN strongly encourages trips to Palestine to see upfront the struggle Palestinians endure on a daily basis. Established justice tours usually last about two weeks and offer both visits to Holy Land sites as well as experiences with Palestinian people. Most tours also include visits to both Palestinian and Israeli activists who work for justice and freedom for the people of Palestine. Or you may want to plan a do-it-yourself tour. To find out more about tours, visit the MennoPIN website and click on the Tours to Palestine tab.Read More
Kumi Now
A Palestinian Theology of Liberation, Naim Ateek, Orbis Books, 2017
Why Palestine Matters
No Way to Treat a Child Campaign
Mondeweiss
The Electronic Intifada
HP-Free Church Campaign
Prayer – A Jewish Prayer for Peace
In the name of Elohim, the most merciful. May the Palestinian people receive the healing powers of our prayers. May they be granted safety, success, love, security, and hope. May they enjoy the fruits of freedom and equality that they—and all human beings—deserve. As Jews, we pray for their well-being. We remember that the Holy Land is a shared space and pray to see the day when Jews, Muslims, Christians, Druze, and all religions will live there together in peace. We hope for the day when Palestinian refugees may return. We pray that together with their Jewish neighbors they can rehabilitate their history and rebuild what could be the best place on Earth. A place of many cultures and true equality. We pray that Palestinians will be able to live lives free from violence and oppression. And we ask God to help us build bridges of peace with them. May we be the light that brings peace and hope to our Palestinian friends and to all the world. Amen. From ritualwell